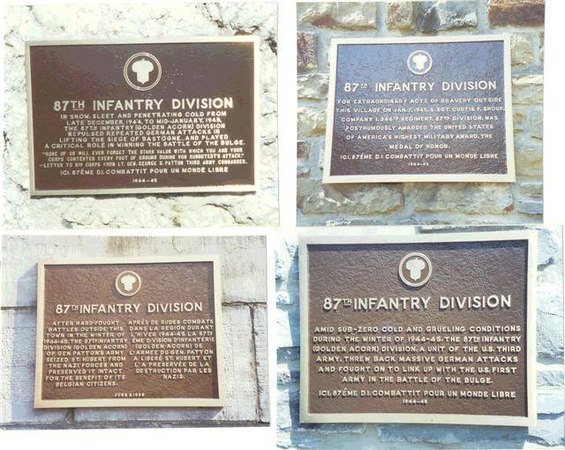 Four 87th Division Memorials dedicated at Pirompré, Tillet, Moircy, and St. Hubert. June 1996 – during the 87th Division Association Tour, led by Earle Hart, A-345. As Monuments Committee chairman, Mitchell Kaidy; D-345, suggested the plaques, wrote all the texts for them, (some translated into French by Gilbert Stevenot of Rochefort), wrote nearly all the speeches, including those in French, (they were translated from English) and presided at the ceremonies in four villages. Mr. Kaidy had the plaques made in Cincinnati and shipped as antiques (to avoid duty) to Stevenot. The 87th Training Division was represented at the ceremonies, as was the U.S. ambassador. U.S. fighter aircraft from Germany overflew the Bloody Crossroads ceremony, and over 1,000 Belgians attended-- a large number for a small nation! These are low-resolution pics for now – will find the higher resolution copies soon to replace these. More pictures of dedication are in gallery of Tillet, and Pirompré, Belgium gallery. Photo credit to: John E. McAuliffe President of the Cent. Mass. Chapt-22 John served in M-347 of the 87th Inf. Div. WW-II.