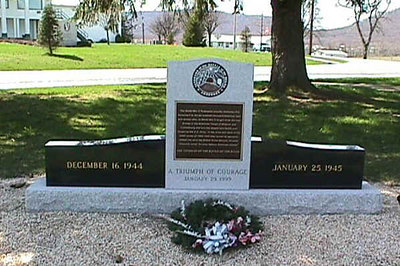 Battle of the Bulge Monument Fort Indiantown Gap Military Reservation Ft. Indiantown Gap, PA Home base of the 28th Infantry Division of the National Guard. http://www.battleofthebulge.org/ gives this info: Presented by the World War II Federation, the Battle of the Bulge Monument at the intersection of Clement Avenue & Fisher Road, on Fort Indiantown Gap Military Reservation honors the 81,000 American troops killed or wounded in the Battle of the Bulge in the Ardennes between December 16, 1944 and January 25, 1945. Military officials and World War II veterans held a ceremony on January 25th, 1999 to dedicate the black and white marble monument called “A Triumph of Courage.” It also recognizes the 600,000 American men who fought three German Armies in the Ardennes Forest of Belgium and Luxembourg and won the largest land battle ever fought by the U.S. Army. In the snow and sleet of the bitter winter of 1944-45, they turned an apparent defeat into what the British Prime Minister Winston Churchill called “an ever famous American victory.”