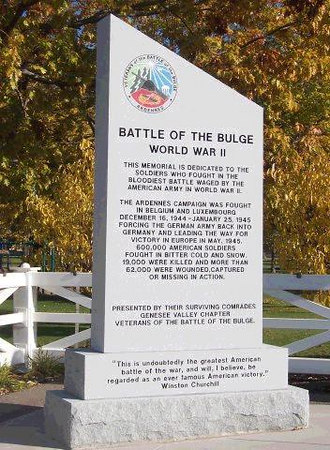 This is 2 of 2 pics - Rochester, New York. VBOB monument dedicated by the Genesee Valley Chapter (Rochester, NY) Veterans of the Battle of The Bulge. October 15, 2005. In attendance were: John Foy A-347, Mitch Kaidy D-345, Bill Statt E-347, Frank Colgan, Jim Comstock HQ346, Fred Kitson D-347, Bob Liming Hq 2 346. ================== The following article by Mitch Kaidy appeared in our newsletter. BULGE ECHO GENESEE VALLEY CHAPTER V.B.0.B. DECEMBER 2005 HUGE, MAGNIFICENT MONUMENT DEDICATED TO BATTLE OF THE BULGE WITH SPEECHES AND REVERIES By Mitchell Kaidy, Editor On a sunny, autumnal day in November, a great unveiling took place at Ontario Beach Park facing Lake Avenue—the dedication of a ten-feet tall white granite monument that will live in the memories and history of the Rochester-Monroe County community. Members of the Genesee Valley Chapter, Veterans of the Battle of the Bulge, had covered the polished stone marker with an authentic World War 11 parachute owned by John Cipolla of Greece, who served with the 101st Airborne Division. Cipolla and others dramatically dropped the parachute revealing the granite monolith topped in a colorful offset of the circular symbol of the national Veterans of the Battle of the Bulge. It was fitting that the largest battle in American history—which claimed 81,000 killed, wounded and captured 61 years ago—had erected such an imposing remembrance, drawing a gathering of over 300 from Rochester and the area, including relatives of some soldiers killed in action. Speakers included State Sen. Joe Robach, who played a prominent role in state financing, Monroe County Executive Maggie Brooks, Rochester Mayor Bill Johnson, Stan Wojtusik of the national Veterans of the Battle of the Bulge, Founding President Dick Brookins, and Chapter Secretary John Foy. President Tom Hope acknowledged the visionary role of Joe Tedesco, whose suggestion of a modest monument ballooned up to the nine-foot tall marker engraved with words contributed by the executive committee of the Genesee Valley Chapter, Veterans of the Battle of the Bulge. Sen. Robach conceded that “It has been a long work in progress,” but paid tribute to those who persisted to make the monument a success. “If it were not for these World War 11 veterans,” he declared “we would not be here. This memorial will recognize their sacrifice and help the community show its eternal appreciation…” Founding President Dick Brookins of the 28th Infantry Division observed that the “real heroes were those who never came home. We owe our lives to them and we will never forget them.” He introduced Gary Beikirch of Rochester, who won the Medal of Honor as a medic in Vietnam. In a moving retrospective, Chapter Secretary John Foy, a machinegunner in the 87th (Golden Acorn) Infantry Division, declared that those who fought were “from the farms and factories, offices and schools, the sidewalks of New York to the shores of San Francisco. For a brief moment in history, these men held our nation’s destiny in their hands,” he said, adding dramatically, “They did not fail.” Foy, who received the Bronze Star, the Combat Infantryman’s Badge, and three battle stars, recounted his still-powerful vision of his assistant gunner feeding bullets into Foy’s machinegun. Sensing that his gunner had fallen quiet, Foy turned to find that a bullet had scored a direct hit on him. “For the most part we were children of the twenties,” Foy said, “citizen soldiers, draftees, and volunteers—young men hardly more than boys. The real story of the Battle of the Bulge is the story of these soldiers and the intense combat action of the squads, platoons, companies…Around their necks hung their dogtags and their rosaries; on their head their steel helmets, and in their breast pocket was a picture of the girl back home…” Sketching conditions during the month-long battle, Foy recalled that “the ground was snow-covered and frozen solid, the skies were gray, the days were short, the nights long and frigid. These are the men you see before you,” he said. “It may be hard to believe, but 60 years ago we were young and tough…for us, the soldiers who fought in that war and the families of those who died, the war will never end.” Executive committee members who forwarded the monolith and wrote the text included Joe Brandt, Jack Foy, Felix Liebmann, Bill French, Tom Hope, John Cipolla, Mitchell Kaidy, Dave Bush, Joe Tedesco, and Marty Cocca.