Submitted by John McAuliffe, M-347 who would appreciate any comments,thoughts, or memories regarding friendships made.

Update - January - 2009 - comment posted:
My name is Joseph Barvir and I am researching my family tree.
My family is from the Baltimore area.
I was wondering if anyone has any information on the early life of Joseph John Barvir.
If you have any information please feel free to e-mail me at joeybarvir@aol.com.
Thank you. :)
Read More 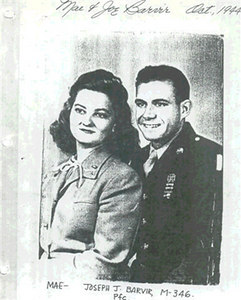 Joseph John Barvir, born 1920 and lived in Annapolis, Maryland.
He Married Mae Barvir Oct. 1944.
Before the war, he worked at B-26 Bomber plant in Baltimore.

He earned the Bronze Star Medal and the Purple Heart for his wounds.

After the war, he worked for AT&T....Held a pilot's license....
Had a hobby of and loved flying.

Joe had what he called his "War Room" on 2nd floor of his home in Graham, NC., which many of his Army friends visited and talked over war experiences.

He and Mae went on several European Tours with the 87th Division Association.

They loved the comraderie and made many friends. He was a loving and devoted husband and very self-effacing.

He and Mae were WW-II History Buffs - especially of the 87th Infantry Division.

After his death, many of his Army Buddies still visit with Mae and exchange letters and Telephone calls.

He is buried at Arlington Cemetery,VA.