Remembering the Battle of the Bulge - 87th Infantry Division

Remembering the Battle of the Bulge


The din of battle summons all who hear the blare of the trumpets call.
The soldier stands in ready ranks in rows beside the mighty tanks.
The battleground in Ardennes green,
now lain in winter's snow-white sheen
The stark bare foxhole is my bed with splintered fir boughs overhead.

Here I lie with body numbed protected from the German gun;
Through sleepless night I lie and pray thinking of the dawn of day.
My prayers that come from half closed mouth are seared with curse words that I shout.
From snowy lair I leave each day to meet the foe where death may lay.

From Bitter Woods to open field I run the gamut without shield
while shells of deadly eighty-eight before me burst to halt my gait.
The windblown snow blinds my eyes, the low hung fog dims the skies
with bandoleers across my back-- my body strains against my pack.

My trigger hand is numb and still
but ready, fixed and trained to kill.

I cross the field of a yesterday where soldier's frozen bodies lay-
Once in perfect battle lines they stood;
Now lay in grotesque forms like logs of wood.

Lord, that I may live this day; protect me from a soldier's grave
many are the battle dead o'er which some day
a soldier's flag shall wave. 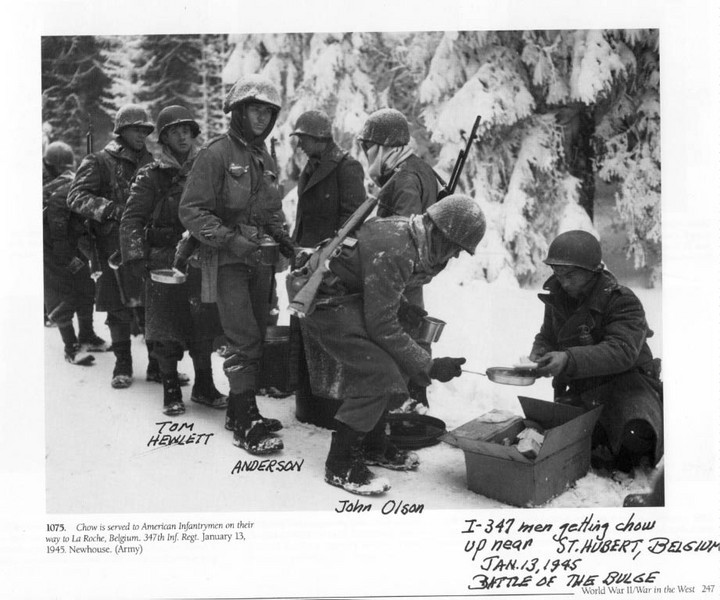 This is letter sent to Army HQ by John McAuliffe
describing photo and giving information about it:

Dear Sirs:
For your information I have enclosed the famous and popular photo found in most Army History books related to the
"Battle of the Bulge"....

Unfortunately most books do not give credit to the photo and identify it.

The photo is of I-Company, 347th Inf.; 87th Infantry Division.
It is an Army Signal Corps photo with the caption,
"On the road to La Roche".....

Unfortunately the unit did not go to La Roche but went into action in January 1945 at Moircy,Tillet, Bonnerue in Belgium.

The unit arrives here to get the new issue of galoshes as seen in the photo.

The soldier with carbine over shoulder receiving his portion is John Olson of Arlington Heights, ILL and still lives there.

Other soldiers are identified. Tom Hewlet with the forlorn eyes died early after the war, but his son Tom Hewlett and wife Pat attend the 87th Div. Assoc. Reunions as does Olson and his wife.

The Company Commander of I-Company, 347 Inf. was and still is Captain Ray E.Miles, who lives in Richmond, VA.

I am sending you this information for your observation and possiblity for your Headquarters to properly identify this photo for posterity.

My qualifications are that I am a former member of M-347;
87th Inf. Div WW-II. I am the Past Commander of the 87th Inf. Div. Association; I am current Vice Pres. of Chapters for the National Veterans of the Battle of the Bulge Inc; I am current Pres. of the Cent. Mass. Chapt.-22;VBOB....

This photo tells a lot; Just look at it ; examine it and from the clothing and the surrounding snow draped fir trees, one may get an inkling of what it was like in the ARDENNES CAMPAIGN during WW-II.

Best Regards,
John E. McAuliffe
==========
Info also obtained from message posted:
" Included in this potograph is my grandfather, William Corriveau, back row looking to the left with his face covered and the BAR hanging on his shoulder. As I understand it, this was his squad. I too have an original DOD print of this picture that sits proudly in my office."

This photo can be found in many WWII books.
It was the first photo I put in our family tribute book about our Uncle Mel.
To discover that he served in the 87th Infantry Division, and now to know this photo is of men from the same Division, makes the photo a very emotional one for me.

As with all galleries of history06 -
we welcome comments/thoughts/memories.
Just click on the "comment" in
lower left of page.

Here's to the Golden Acorn Soldiers - Forever STALWART AND STRONG!