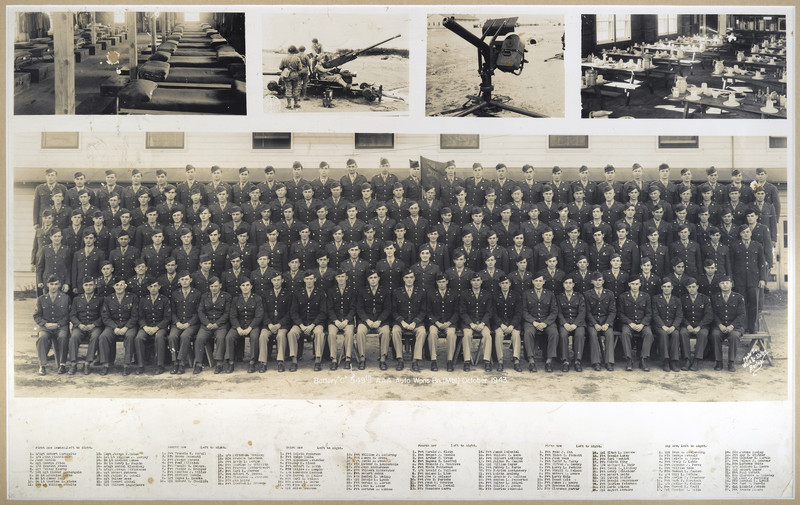 List of names are under picture.
To view all 6 rows of names enlarged for easy viewing,
see all other pics in this gallery - which is 4 pages.

I also enlarged sections of this group pic.

Please make contact if you are connected in any way to any of these names shown in this gallery of names under this picture!

Also if you have timeline of where this unit was for month of
December - 1944.
Morning reports could not be located for this unit for this month at national records center.

UPDATE 8-2007
We have found and talked with two wonderful gentlemen from this unit!

Both were very humble in their discussing their time/place in the war.
When Mr. Luedke gave me permission to give his name, he stated,
“I guess that would be fine – but just don’t make me out a hero anywhere..…I was just one of 16 million – I was just a Buck Sgt.”
and “put my picture small.”

A news article that featured Mr. Luedke describing his time/place in the war serving in the 549th has now been posted on the main 87th ID page under "News Articles" It is titled, "CALL HIM LUCKY"

He recalls maybe three more men who were from around St, Louis, MO
Cpl August Mormino –
(In unit pic - he is in 5th row from bottom # 26th from left),

The 549th AAA has had several reunions in St. Louis, and Branson, MO, but as far as he knows, there hasn’t been one in several years.

Update - Aug - 2007
Mr. Luedke gracioulsy sent me original pictures he took during his service and okayed me to scan and place on this gallery.
It will take a few days to get all scanned and placed.
Again, we would appreciate any posting of comments or info after viewing these photos.

Update - September - 2007 -
Found PFC Laverne White
Mr. Ivan Muilenburg's son, Tim Muilenburg, saw Mr. White's picture in the latest edition of the Golden Acorn (the magazine of the 87th ID)!
From there he made contact and met him -both living in Iowa.
He shared information - and gave Tim a Roster with names/addresses.
We are so grateful.
My dad sent letters to many but most were returned - now deceased.
Mr. White's individual photo has been added to this gallery.

Update - December - 2007
Cpl August Mormino's son, Tony Mormino contacted me after finding his Dad's name listed here!
I sent him my research story and information about all contacts made and then he called Mr. Luedke.
We have added Cpl August Mormino to the individual men in this gallery.

Update May – 2009
Another contact from this unit!!
1st Sgt Oliver Santangelo
An email from his stepson, Charlie Craig:
My daughter and I had a recent conversation with my step dad.
He showed us his Army discharge papers and we wrote down his unit number.
To our surprise we found his pic on that 87th site.
He is Oliver Santangelo.
He is 1st. row 7th from the left.
We bought the picture and are having it framed and giving it to him on Memorial day to honor him and the men he served with.
He is 89 and still sharp as a tack.
Thanks,
Charlie

I replied asking him to send more info which I will place here once I receive it.
I also cropped his photo from the large unit photo and have placed it in the gallery.
Isn’t this amazing!

On Memorial Day, we gave Ollie (Mr. Oliver Santangelo) the framed photo
of the 549th AAA unit – Btry C.
He was shocked and really touched that we were able to find it.
*see photo of this special moment in the 549th photo gallery.

I did ask him about the names you gave –
He remembers Mr. Luedke.
He said that during training at Camp Davis,
he and Mr. Luedke had to escort the body of a young man back home.
The soldier had accidentally killed himself while cleaning his rifle.

He could not recall where they were for the early part of December of 44,
But claims that the 549th was in Bastogne during the Battle of the Bulge.
Ollie says that they couldn't get air cover for 4 days due to the weather.

Ollie and my Mom attended a reunion in St. Louis/Branson, but he couldn't recall what year.
I will ask him about more of his memories when I see him again this week.

Thanks to you and all of those who have contributed to the site.

Update - June 5, 2009
Email from Charles Craig -
"Ollie was the 1st Sgt. He was the one who had the company clerk do the daily journal. It was his responsibility for that to happen.
Don't know why but it is on onion skin paper, but it's legal size paper..
He has had the journal since he left the Army.
Ollie did engage in combat and tells of being in the foxholes freezing.
He actually came face to face with Patton who called Ollie a "son of a bitch" Ollie isn't happy to be called that, but he has great respect for Patton."

Original Unit Journal giving time line!!
Thanks to Oliver's grandaughter, Katie, who typed this journal out since it was hard to read original.

Charles has passed on from Mr. Santangelo other memories and photos which now has given this unit enough history collected that I have asked webmaster to add this unit under link of "our History" so I can place all items.

As a side note - several have photos of the horrors they saw when they went into the concentation camps after they were liberated.
At this point - I have deferred for now placing them here.
Do know, the men who wtinessed these atrocities want to make it clearly understood - -
it was real....and it was horrible. .
---------------


Unit Photo contributed by Tim Muilenburg,
son of Ivan Muilenburg, who served in the 549th.